Experience the primordial majesty of Fiordland's Northen Fiords where clouds scud the ragged peaks of glacier-cleaved mountains streaked with waterfalls as we explore Milford Sound and the more remote Bligh, George, Caswell, Nancy, Thompson and Doubtful Sounds, accessible only by expedition ship. 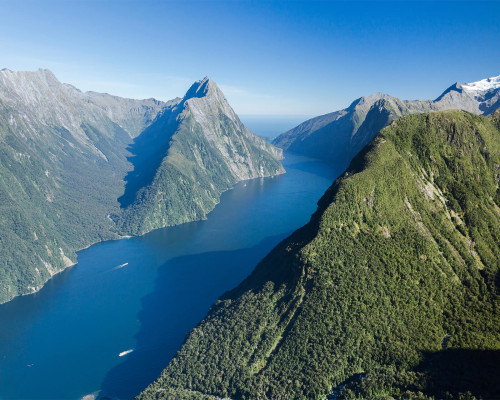 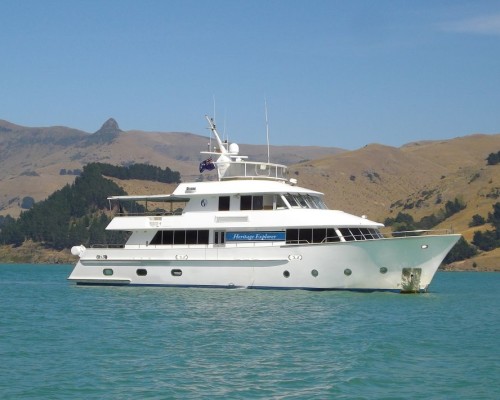 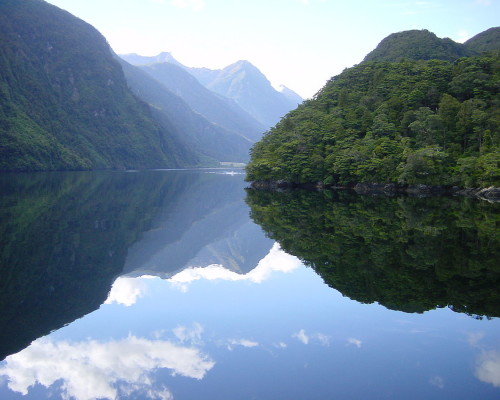 Cruise Includes:
Landing fees, pre and post cruise coach transfer, all on board ship accommodation with meals and all shore excursions and activities. GST, house drinks, expert on board naturalist guides.

Private transfer from Queenstown Airport to Te Anau, your driver will be waiting for you upon arrival at the airport.
Included: Te Anau Glowworm Caves: Experience a mysterious underground world of rushing water before drifting in silent darkness beneath the luminous shimmer of thousands of glowworms. Duration 2hr 15min.
Overnight at The Luxmore Distinction Te Anau, Deluxe Suite

Included: Jetboat in Fiordland – Pure Wilderness: Jet boat down the Waiau river, across Lake Manapouri, to the ancient forest of the Fiordland National Park.
Included: Cruise on Lake Te Anau: Aboard Faith you sail across the deep waters of Lake Te Anau, between untouched mountains, and into South Fiord. A short, guided walk reveals to you the mystique of Hidden Lakes.
Included: Ata Whenua Movie – Fiordland Cinema: Take an unforgettable journey through some of the most awe-inspiring landscapes on earth. ‘Fly’ through the Fiordland ‘World Heritage Status’ wilderness that you would otherwise never see.
Overnight at The Luxmore Distinction Te Anau, Deluxe Suite

Check out of your accommodation and make your way to the designated meeting point in Te Anau for your Heritage Expedition cruise.

Make your way to the designated meeting point in Te Anau then enjoy the scenic drive through the Eglington Valley to Milford Sound and join Heritage Explorer in Preservation Inlet (times and meeting point will be confirmed with your voyage documents). The captain and expedition leader will be waiting to welcome you aboard Heritage Explorer and show you to your cabin. Settle into life aboard before and prepare for the adventure ahead while revelling in the spellbinding scenery of Milford Sound.

Join your on board expedition naturalists to spot albatross and seabirds as we sail the rich waters of the Fiordland Coast before arriving in the seldom visited yet spectacular waters of Bligh Sound. With its crooked ‘Z’ shape you feel at the heart of the Fiordland wilderness when venturing to the head of the fiord at Bounty Haven where the Wild Natives River flows from the mountains above. Numerous sheltered coves and clear waters make it perfect for kayaking, of particular interest here is one of Fiordland’s several ‘China Shops’, special zones containing a fragile environment where deep sea life can be viewed closer to the surface than normal due to the darkness created by the brackish water.

After a night enjoying the tranquility of Bligh Sound we navigate to the largest of the Northern Fiords, George Sound. Stretching 26-scenic-kilometres, George Sound is the longest of the Northern Fiords and with several arms branching from the fiord we have multiple options but the spectacular sight of Alice Falls flanked by dense forest and tumbling over boulders as it thunders out of Lake Alice at the head of fiord is always a strong draw. It was at the head of George Sound that Wapiti/elk were introduced to New Zealand in 1905, part of the herd being gifted by American president Theodore Roosevelt.

Another rarely explored fiord, Caswell Sound is home to the last physical remains of the 1949 New Zealand–American Fiordland scientific expedition, a primitive hut standing on the banks of the Stillwater River used while studying the Wapiti/elk herd introduced earlier in the century. Tiny Styles Island guards the fiord’s entrance to the Tasman Sea while walks include a nature-filled stroll along Stillwater River towards Lake Marchant. Fishing here is good for those interested in joining the chefs in securing tonight’s dinner.

Today we have the exploration of the southern-most of the northern fiords on our agenda. Flanked by steep mountains including Mount Napier and Command Peak, Nancy Sound was likely named after the vessel Nancy by Captain John Grono one of the early sealing captains to explore Fiordland. Nancy Sound’s unusual leg shape was not lost on those who named it bestowing the section it turns at right angles to the north Foot Arm, which dutifully moves into Heel Cove and Toe Cove. Leg Head and Bend Point were similarly literally named. At nearby Charles Sound, the fiord branches into Emelius and Gold Arms at its head with Gold Arm being home to one of the most extensive marine reserves in the inner fiords (Kahukura Marine Reserve) while other sections are included in the Taumoana Marine Reserve. Your captain and expedition Leader will find a suitably sheltered anchorage for Heritage Explorer where activities could include kayaking or joining your expedition guides in a coastal exploration by Zodiac.

A short sail southwards brings us to the extensive sheltered waters of Thompson Sound, initially scouted for sheep farming suitability by early setters in the 1850s and location Secretary Island, an iconic site in New Zealand conservation history as one of the first large islands declared rat free in 1988. We then explore some of the most spectacular scenery in all of Fiordland – Doubtful Sound, or the sound of silence as it’s also known. Spanning some staggering 40-kilometres and holding the title as New Zealand’s deepest fiord, Doubtful Sound with its cloud-scraping wilderness cloaked mountains, sheer stone cliffs, waterfalls, inlets, quiet coves and wildlife presents nature on a scale so grand it’s off the chart. Photographic opportunities abound and our time spent here could include ship cruising Blanket Bay, the Shelter Islands, Pandora River, Deas Cove and Open Bay. Enjoy a farewell dinner with the team aboard Heritage Explorer.

This morning we navigate to the very head of Doubtful Sound in Deep Cove home to several waterfalls including Helena and Lady Alice Falls. After a final breakfast and farewells, head ashore where a transfer to Te Anau, via the picturesque Wilmot Pass, the road constructed as part of the Manapouri hydro scheme, awaits. In case of unexpected delays, we ask you not to book any onward travel from Te Anau until after 3pm this afternoon. During our voyage, circumstances may make it necessary or desirable to deviate from the proposed itinerary. This can include poor weather and opportunities for making unplanned excursions. Your Expedition Leader will keep you fully informed. Please note: Voyages are planned and scheduled pending final regulatory approval.

Package fares are NZD (Or USD, specified above), per person, share twin, based on current promotional fares which are subject to change without notice, based on two people travelling together and share accommodations.
Deposit required: Deposit of 25% is due within 7 days.
Completed booking form required with deposit.
Final balance must be paid no later than 90 days before departure.
If you book less than 90 days before departure, full payment is due immediately.
Heritage Expeditions have their own specific Terms & Conditions. Full details provided at the time of quoting/booking confirmation.
All New Zealand Traveller packages are subject to General Terms & Conditions.

Enquire about this trip

To find out ore details, fill out the form below and we'll be in touch.

Discover the world from your inbox